Through my journey as an English teacher and a language learner

How to teach American culture through paintings

Yesterday, I had the most unusual class I ever had. We had to meet our teacher, Kirk, directly inside the Yale Art Gallery, this incredible and free museum that I am lucky enough to visit three times a week.

He made us walk to the American wing, and asked us to choose two paintings that we would save if the building was on fire. Of course, if you don’t have the chance to have a Yale Art Gallery right next the corner, you can also put different pictures all over the classroom and make your students choose.

We all chose, and we had to explain and defend our choices because at the end, it appeared that we would be able to save only one painting. The class can debate and provide arguments to choose one painting over the others.  It is a great writing exercise (they need to prepare first, we had ten minutes) and a great speaking one as well.

We set our minds on Edward Hopper’s Sunlight in a cafeteria:

(For the record, that was my choice, so I am pretty pleased with myself just about now)

We chose Hopper because of its importance within the American History of Art. Most of the students probably never heard of him, but he is one of the greatest painter from the US. Choosing Hopper made sense for different reasons: it’s realism, so it’s quite easy to catch the meaning.  It’s modern, so students can relate to it. And the colors are carefully chosen, so it’s nice to look at it. Let’s be honest, most students prefer to look at a nice, bright picture than at a blurry, dark one.

Talking about Hopper’s painting made us talk about life in the fifties (this precise painting is from 1958) and what we actually knew about it. As the teacher, we can use the characters in the paintings to create a discussion (what about their clothes? what about the decoration of the cafeteria?), avoiding a boring lecture about “Life in the US during the Fifties”.

The second class, which will be held tomorrow, will follow a precise path, divided in three parts:

I choose John Trumbull’s Bunker’s Hill battle, which you can find below . 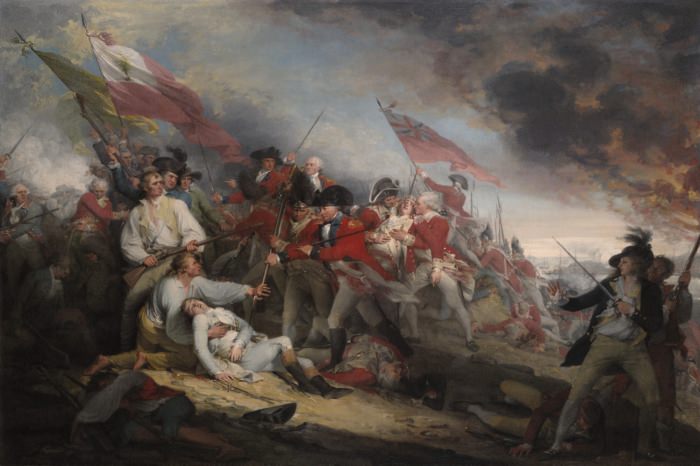 I’ll probably tell you more about American History next time, since I am going to focus on the Revolutionary War.

Powered by Jonas Chopin — Up ↑